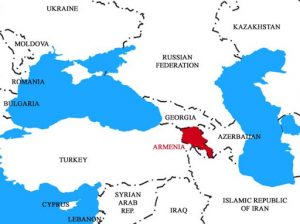 In our modern days of enlightened up-side-downism, deducing what the deuce bedevils some far flung corner of the world can be a tricky proposition.  Take the current conflict in the Nagorno-Karabakh region of the south Caucasus, for example.  The Ionian Peninsula is a crossroads claimed by a lot of people.  The Turks have had a pretty good run of things over the last eight centuries, but over the last 100 years or so have been plagued by pesky uprisings among those they conquered and the latest shooting match is just the latest volley in a long running fight by the Armenians secure the existence of their people and a future for Armenian children.

The Nagorno-Karabakh region is entirely within the Westphalian line that demarcates the borders of “Azerbaijan”, but the people within the region take some exception to that.  Hence a whole lot of blood shed in the area.  This latest shindig penetrated the conscience of the generally soporific corners of the American zeitgeist because one well known Armenian family – the Kardashians – asked for support for their people.

(Side note: I thought their people were Americans?  The current crop of Kardashians are FOURTH generation immigrants.  Their focus on their homeland lends credence to the notion that it takes five full generations for the dirt of North America to work it’s magic.  But I digress.)

A lot of celebrities offered support for Armenia then abruptly withdrew support and apologized for it within hours – most likely after a series of calls from their money-masters.  That right there was my first clue that the Armenians were fighting the good fight.  Whoops, actually, my first clue that the Armenians were the good guy here was that they are sandwiched between the rump Ottomans and their client state of Azerbaijan.

Still wary of leaping to the wrong conclusion, I hit up Twitter for confirmation and boy did I get it good and hard.  Scrawling through a search for “Armenia” brought wave after wave of support for Azerbaijan, countless accusations of warcrimes against Armenia, and lots of clearly staged photos of dusty children with tear-strained cheeks, all of an Azer bent, with nary a murmur of support for Armenia.  If Twitter has Jack’s thumb that hard on the scale against Armenia, you know that they are the quiet kid punching back at the bully after years of provocation.

This is the world in which we not live.  Informational conflict is the waters in which we swim.  And you can tell a lot about the world from what they won’t let you see. Atrocity’s against Christians leads the list, and that’s why backing Christian powers against all comers is always your best bet.

It is all too easy, here in the midst of an American election, to lose sight of the fact that we are engaged in a world-wide spiritual war against evil.  Others around the world are fighting that war with more than just ballots, and while ballots are needed on our Christian soil, our allies need help defending their Christian soil.

So after due diligence, I offered my support to the Armenians out of Christian solidarity.

And you can, too.