Beware the social media influencers, those degenerates who want to lead you down dark alleys.  They might just lead you down into a Carcosa of light.

So yeah, maybe it’s just the man’s brash mellowness, and maybe I’m only just now become aware enough of the transcendental nature of reality, but maybe it’s mostly that I’ve surrounded myself with a better class of internet.  Whatever the reason, I’m coming around to the side of the David Lynch respectors.  Look at the brass balls on this guy: 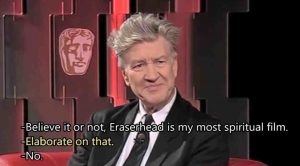 Now that’s funny.  But this clip is sublime:

Cue the “Curb Your Enthusiasm” as Captain Bugman shorts a circuit upon learning that all the codes and mysteries of what he thought were nihilist post-modernist claptrap are actually kabbalistic paeans to One Holy and Apostolic Faith.  Hilarious.

Might need a few crutches to avoid falling into the same pit as Senior Gapemouth there, but I’m willing to roll up my mental sleeves and dive in.

More to follow later. After I’ve watched a bit of his stuff with my newfound eyes.