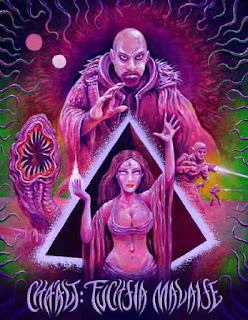 Discussing a book as creative and original as Cha’alt (a setting written and designed by Venger Satanis for use with whatever iteration of the D&D tabletop RPG) presents a number of challenges for the reviewer.  Specifically, the marketing hype used within the tabletop RPG market has devalued the meaning of the most appropriate descriptors for Cha’alt.  Taking the easy route would make this product sound exactly like a host of other independent RPG products, which it most emphatically is NOT.

That last observation opens the door to a solution.  A lot of those challenges of talking about Cha’altcan be overcome by starting with a discussion of a few things that Cha’altis most emphatically NOT.

For starters, it isn’t nearly as degenerate as you would expect from the marketing.  It does contain some adult themes – drug use primary among them – but it isn’t the all out sleazefest that you find with other Venger products.  It does contain some gratuitous T-and-A art and plothooks, but these are a spice added to the main dish and not the focus of the meal.  The “naughty bits” are easily ignored and generally rise only to the level of what one might find in a typical issue of Heavy Metal.

On a related note, Cha’alt comes across as an amoral setting, one in which crime lords and demon worshippers and corporate robber barons exist for their own sake.  A closer look reveals some surprisingly deep touches to the setting that encourage, if not outright heroism, at least a healthy respect for doing the right thing.  Rather than paint with balck and a few closely related bands of grey, Venger’s setting also respect for the need to paint with bright white pure light, for contrast if nothing else.  To take just one example, it includes a section titled “Murder Hobo Regrets” which includes a long list of acts of contrition, one of which must be undertaken or the character suffers from specific and concrete game-world ramifications.  It’s a small thing, but an important one, and it goes a long way towards smoothing out what could be a very bleak and hopeless universe.

Cha’alt also doesn’t fit the mold of the now over-used term “gonzo”.  That word applies, to be sure, but it isn’t sufficient.  These days ‘gonzo’ has been applied to everything up to and including the strait-laced wokeness of Wizards of the Coasts fantasy Seattle version of Waterdeep.  It has also been applied to the kitchen-sink approach of settings such as Gamma World, and it doesn’t really apply here.  Sure, Cha’alt gleefully rips from numerous sources and refuses to be limited by the normal strictures of genre and setting.  There is, however, a method to Venger’s madness, as every odd and quirky misfit detail works within the setting.  The unpredictability of things isn’t a crutch used to smooth over missing pieces or a lack of design.  It is the design.

With those out of the way we turn our attention to describing the world of Cha’alt with fresh eyes.  Physically, the world is a post-apocalyptic desert wasteland on an alien planet, one pockmarked by small outposts of civilizations that range from the gutter to the stars.  The doorman at the local underworld dive bar might keep one eye on the lot, to make sure no one messes with the alien raptor mounts, low-riding hover-cycles, jeweled flying carpets, and strange pulsing orbs of multi-hued light.  Weapons checked at the door can range from small curved daggers to ugly and heavy slug throwers to sleep beam weapons to crystalline staves half aware of their fate.  It’s a sci-fi world, and a magic one, but one that also incorporates the full spectrum of spiritual warfare as chthonic nightmares wage war with literal demons, and angelic beings work subtle ploys of their own to keep the dumpster fires of that war contained.  Naturally, all of the factions – physical, corporate, spiritual, and other-dimensional – use men as weapons in a “let’s you and him fight” kind of war.  Sex, drugs, violence, intimidation, hard cash, power, and secrets are the currency of the day, and the players step into a resultant political scene that can be as simple or as complex as the table can handle.  Better yet, it’s one that can ramp up as the character’s power level does, in easily digested bites.  They might just be interested in helping the local bodega owner escape from under the thumb of a two-bit syndicate only to find that the syndicate has been order to secure that location because of ley line shenanigans or hidden deposits of rare drug-ore – and that the orders came from a space-faring Federation that doesn’t want to dirty its own hands.  Having eliminated the minor threat, the PCs can easily get caught up in the fight between powerful wizards and massive galactic gunships.  It’s that kind of devil-may-care approach to the setting that too often gets tarred with the same ‘gonzo’ brush as other, less fully realized settings.

The book’s design and art supplement the written word to perfection.  Sometimes harsh, sometimes bizarre, and sometimes intimate, it all works to segregate Cha’alt from the crowd.  It is a lush and easily digested buffet.  It helps establish the setting as the sort of bridge between medieval fantasy and far flung future tech, and works to inspire the imagination to break free of that ossified and stunted assumption that a wall exists between the two.  The place echoes with the source material that inspires it, and encourages the user to draw from his own experiences with pop culture to add even more outlandish detail to an already colorful setting. 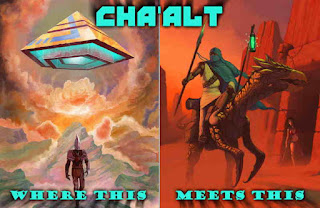 To really hammer home the alien-ness of the place, Venger uses a vague point-to-point map labelled with evocative (though perhaps ironic) place names.  Elysium can only be the pleasant oasis of technologic wealth acquired through seedy means.  Nothing good can come of the Black Pyramid, for it must be an unholy place where only black-hearted men dare tread.  Even the made-up names carry a note of exotic beauty.  Kra’adumek.  S’kbah.  Ascenda’as.  Even a place like A’agrybah carries just enough real-world meaning to help readers understand the eastern, onion spired flavor of the place without completely turning into a Middle-Easter caricature.  It has those undertones, but like so much of this setting, it manages to become its own thing.

Cha’alt: Fuchsia Malaise, drops into this world like an eldritch bomb.  The words after the colon in its title refer to a soporific drug that has enervated the people of Cha’alt.  That drug war – an open war along the lines of the Opium Wars of our own world – provides the skeletal framework around which most of the action revolves.  Cha’alt suffers from the curse of possessing an important ore littering its crust, which has attracted the attention of powerful extra-ch’aaltian forces.  They found that fuscia malaise could be used to induce the troublesome and fractious chaaltian populace into willingly accepting the yoke of oppression.  Most have adopted a bipolar life of endless drudgework performed to secure the next round of endless dream-state produced by their next hit.  And the powers that be, as in our own world, are never satiated by access to mere money.  Their depredations have only grown, and at some point somebody is going to have to do something about it. 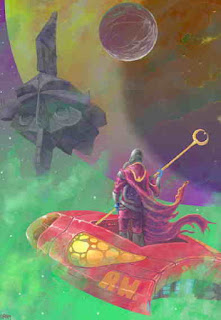 Venger provides a wealth of factions to join and fight, intrigues to join, plots to foil, locations to explore, mysteries to uncover, and adventures to be hand.  And not in the usual bland linear style, nor even the top-down NPCs will do X if the players don’t do Y style, either.  Instead, Venger provides a few grand-scope plots by the major players that will trundle along with little change in the background unless acted upon by an outside player force.  Those can be the thrust of a long campaign, but far more interesting are the countless little nudges toward adventure – short tables of encounters, smaller places, lost treasures that could have epic consequences if found, and minor NPCs whose role can expand along with the scope of the campaign.  These things will arise naturally through play, and the connective tissue becomes the sole responsibility of the players.  There’s just too much here for one table to contain, and no one for one designer, no matter how far seeing, to know how it all fits together.  That can only come out through actual play.

And that really is the best part about Cha’alt: Fuchsia Malaise.  It isn’t a book meant to be read and shelved, but a concept meant to be taken down, taken apart, and put back together in ways no one can possibly understand until its guts are laid out across the table, the fun has been had, the dust has settled, and the malaise worn fully off.  Like the best works of art, Cha’alt: Fuchsia Malaise isn’t just a book.  It’s an experience.

You can get the digital copy at DriveThruRPG, but you’ll want to spring for the hardcover direct from Venger.