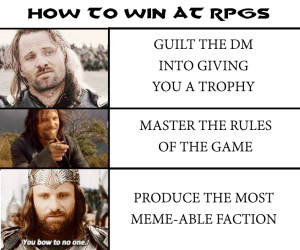 Things are getting a little crazy over in Trollopolous and her nearby provinces.  The besieging orcish army, leaderless after the capture of their demon-queen, has quit the field, and that only made things worse.

Jeffro’s AD&D campaign-by-the-book has kicked into high gear with a week of Braunstein style faction play featuring a number of different factions.  This is an always-on game of D&D in which events are on-going, and most of the factions are run by actual players – even when they don’t have a table-session character affiliated with that faction.  Yes, some of the players have characters that are working at cross purposes to each other.

I’m not a participant, just a guy fanning the flames, and here’s what I’ve been able to piece together so far:

And frankly, I have no idea who to root for in this mess.
There are a few low-key wildcards out there.  For example, Rhedegar is a blade for hire currently keeping the peace at the Prancing Umber Hulk Inn.  SaruMachoMandalf has made an appearance, but I have no idea what he’s up to.  And there are more out there that I’m missing.
There is no central location for information.  Just like the real world.  The Trollopulous News Network is unreliable.  Just like the real world.  And you have to sift through everyone’s own personal biases to obtain any information that you can use in your own life.  Just like the real world.
Combine that with a wealth of meme-dumping geniuses and you’ve got the makings of the the most gripping RPG campaign currently being shared across sociable media.
For a good time, click the links.  Do your research.
Where We Go Fun, We Go All In.
Oh, and remember to watch out for Sarn Idh.  He keeps getting away with it. 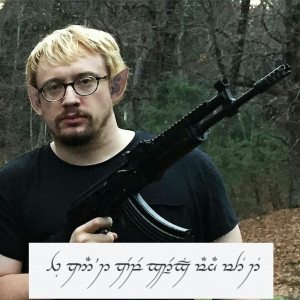