Brace yourself for a revolution in table-top RPGs.

At last, after forty years of D&D and twenty years of instant and always-on communications, the two have been married to create a style that is a literal game changer: 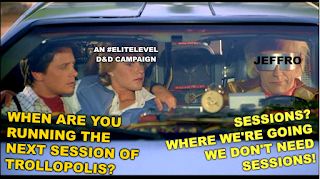 But it ain’t me.  It’s Jeffro, the madman that redefined how to approach background research for D&D sessions with his ground-breaking literary analysis – an analysis so profound it was memory holed for five years before the woke crowd trotted out a low-energy goof to spoof Appendix N with a cheap and flaccid imitation.

Here’s the man with the plan himself:

Maybe we didn’t need to adapt seventies style rpg lore to eighties style module conventions. Maybe we needed to adapt ourselves to even more seventies era rpg lore! 1:1 timekeeping with multiple independent domain-level actors is fundamental axiom we have been missing. Here is what you get by implementing this one neat trick.

His latest post also features links to two other campaigns that are doing similar ground-breaking work.  Proof of concept, if you will.

Click here to learn more about this one weird trick and what it can do for your table.

Once people try this, and decide they like it, you can expect a lot of fascinating discussion on the what, the how and the why.  Jeffro has barely begun to scratch the surface of this fundamental mindset shift.  There is a lot of room for more input, experimentation, and discovery here, people. It reminds me of the earliest days of the OSR, when people were falling all over themselves to discover and reinvent the minutiae of Moldvay-style D&D, but this time it’s even bigger than a retreat and reskin of the easy mode of the 1980s.  It’s a complete renovation from the ground up.

And finally, as always, when a critical mass of people adopt this style for their own table, you can expect a deluge of smart-boy posts from the Usual Crowds staking a claim to have “always known” about the glories of real-time and always-on gaming:

Or maybe not.  This system of spontaneously generated adventure doesn’t lend itself to the subscription model that keeps the grifters in business.  It’s inherently a table-directed style that doesn’t rely on the imagination of others.  It’s a focus on the hobby side of the game rather than the consumer side of the game, and without a clear path to profit the guys with dollar signs in their eyes might just continue to play the role of Baghdad Bob, insisting that there’s nothing to see here, that everything is fine in D&D-land, and whatever you do, just ignore those guys laughing riotously and enjoying long-lived, robust, and authentic D&D campaigns over there near the wieght machines.