What a fun little game from Osprey’s blue book series. 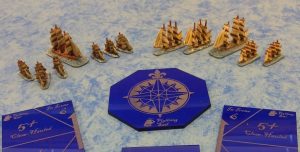 Fighting Sail is a fleet action game that lets you chug a half-dozen or so ships of the line around the table, merrily blasting away at each other.  It strikes a very good balance between historical feel and playability, with ship facing, wind direction, and terrain all used in a way that complicates tactics without overly complicating the game.
So far I’ve got two fleets of six to eight ships of the line in hand, with only the smaller craft painted up.  Pretty soon I’ll be able to throw triple-deckers at each other, though.  And that’ll be a very good day.
Making Adventure Fiction Great Again
Subscribe today to be first to hear about my new release, plus receive a copy of a free fantasy novella!
Follow