My Gaslands set up is a little unusual in that all my fights take place on the streets of Midville, USA. 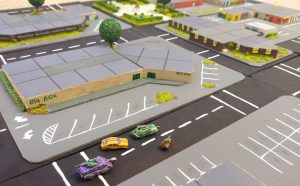 This leads to two big differences between the games shown on The Joy of Wargaming and most other videos – two differences that largely balance each other out.  For one thing, driving on city-streets means that your car has a lot more opportunity to push its luck and re-roll skid dice.  Not always, but often enough that my games feature a lot more driving between Wipe Out checks than most other games.

Notice, however, that the existence of parking lots, sidewalks, and grassy areas means that enough areas remain “rough going” that players have to consider their routes a few moves head lest they lost that advantage of the free Luck Push.  Sometimes it makes sense to eat the roll to get a better line of attack, and that leads to significantly more interesting tactical choices than a dirt lot with a few obstacles. 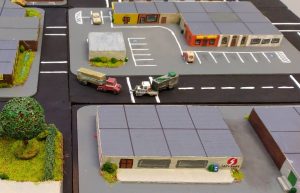 On the other hand, this is balanced out by the necessarily narrow city streets.  The tight confines and limited drivable space makes all the Luck Pushing not just a luxury but a necessity.  If you want to get the right line at the right time, you’re going to need both Spin and Slide results at the right time, and you’re going to need to keep a tight lid on the number of hazard tokens on your car to keep those options available.

It’s not exactly a different game, but it’s a whole different way of playing the game.  And it’s one rich with possibilites that I high recommend to any aficionado of the sweet science of vehicular mayhem. 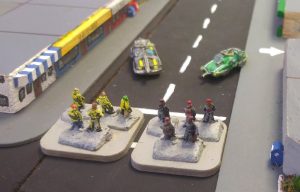