Wargaming videos make a fine soundtrack for painting sessions, and every once in a while you stumble across a bit of genius you can’t wait to steal.  This wonderful battle report from House of Hengist Comics Wargaming Channel struck me as a novel sort of game, and one of those rare scenarios that I’ve never played.  It’s a WWII fight, a little slice of Market Garden fought using Flames of War, but at it’s core is a very different sort of scenario than the usual ‘line ’em up and crash into each other’.  As ever, we can take the ball from Hengist and run with in a direction more suited to our own style and purpose.

The basic idea is a race for an objective as shown here.  Two forces running parallel to each other, both seeking to claim an objective at the far end of the table.  The center line of the table is broken by terrain that blocks movement and line of sight, with only one or two breaks to allow for that all-important tactical decision tree.  Here, we’ve got a Napoleonic skirmish that pits two equal sized forces, both entering the table from the west. 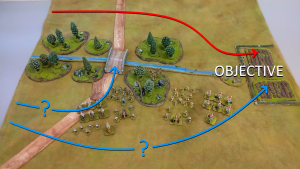 On this much simplified level, the major decision point arises from the question of whether to waste time and resources seizing the bridge and perhaps cutting the enemy’s forces in half, or fully commit everything to grabbing the fields to the east.  The enclosed fields are rough terrain, and not well-suited for cavalry maneuvers, adding the complication that the units on each side that can get there first are not the best for holding onto that ground.
To complicate matters, and this might have been a wrinkle too many, I held one (random) unit in reserve on both sides of the fight.  That uncertainty adds additional weight to the choice of whether to drive across the bridge, given the increased probability of cutting the enemy’s forces or at least delaying any reinforcements long enough to allow your other forces to dig-in for the delayed counter-attack.
No spoilers. To find out how the fight went, you’ll have to check out the channel later this month when the play-through video of this “Chosen Men” scenario goes live.  For now, you’ll have to settle for some pretty shots of the fancy lads in their fighting gear. 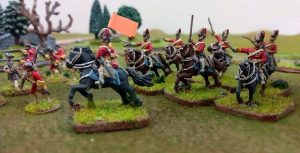 Yeah, I used a post-it note to mark the British Major. Some day I’ll have a reliable printer or get around to painting up a suitable flag on my own. Some day. 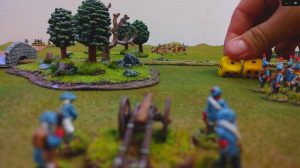 Okay, slight spoiler for those who know “Chosen Men” – that cannon rolled snake eyes while trying to thin the redcoat herd to the north.  This is too nice of a picture not to memorialize here.