The full ramifications of this little fact have yet to be explored. 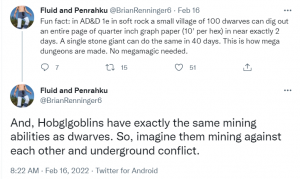 Probably because the bulk of the D&D crowd plays linear, story-line chasing, games that think too small to include such concepts as player-created megadungeons.

In Brian’s case, the dwarven faction is mining in the hopes of finding gold in virgin, rather than coined, format.  They run the risk of tapping into small pockets of nasty critters along the way, but primarily they are doing what dwarves do.  There is so much more to the natural result of implementing this little rule, though.  So much territory left unmapped.

If you’re playing the game as it was meant to be played then you’re incorporating Patron play.  Maybe you built a Patron and handed him over to a player.  Maybe they are Maybe you’ve had a couple of PCs strike it rich by way of lucky hauls out of the DM-generated megadungeon.  In any case, you should have players commanding serious resources, resources that draw the attention of other players and Patrons.  Those resources will often be bulky and hard to move, but often enough they will consist of easily portable and divisible units, such as great big piles of gold.

Once a Patron or PC hits the big time, he can’t just stuff treasure into his mattress anymore. He’ll need a safe place to put it all, and that means either trusting a rival faction, like a bank – and ripped from today’s Canadian headlines we can see how reliably supposedly neutral banks are when push comes to shove even in the modern world imagine how bad it would be in a post-apocalyptic world like that of D&D but I digress – or securing the loot for himself.

Any significant treasure creates its own narrative gravity.  It will naturally attract the attention of rival Patrons and factions, who will stoop to the same nefarious methods as the Canadian government uses against its political rivals, and perhaps even more honorable ones.  Which means that the players will need to start thinking seriously about both Operational and Physical Security. 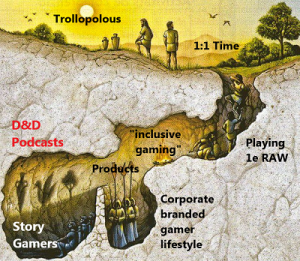 Misinformation is always the best way to start.  “What loot?  That dragon was broke.  We don’t have any treasure, so don’t bother looking.”  When that fails, they will have to start securing the means to secure their jackpots.  They’ll need secure protections and that means building up or building down.  Either way, you’re looking at utilizing some serious resources.  The obvious place to start is the stronghold construction rules in the DMG which clearly lay out costs in terms of gold and time.  Less obvious is the method Brian offers.

Dig a deep hole.  Make the route to the vaults twist and turn in on itself to confuse the unwary.  Hire as many sellswords as you can to roam the halls preying on thieves.  Maybe start a cult to fool the more easily led tribes in the area – kobolds and goblins and whatnot – to take up residence.  You might even be able to convince them to donate a portion of their own treasure to your paper-mache god as rent, and now your security detail pays for itself!

When looked at in this manner, all those megadungeons explain themselves.

And there’s no reason their design needs to be limited to the DM.  When players begin designing dungeons to protect their faction’s family jewels from factions run by other players, you can bet the trickery and deadliness will ramp up by an order of magnitude.  A sort of dungeon-based arms race will kick-off, with players rooting about the world looking for newer and better ways to stymie other players.  That leads to more motivation to seek out ancient artifacts and books that allow PCs to bypass other player’s defenses, or experiments to create the ultimate dungeon-prowling security guards.  And all this leads to a living, breathing, campaign world where the stakes are higher, the drama deeper, and anything is possible.

The only place to get this kind of EliteLevel gaming is the #BROSR, and they are giving it away for free. 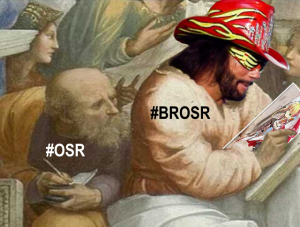 But don’t worry, if you want to buy a product based on this idea that you will never use at the table, just wait a few weeks.  They’ll catch up eventually. You can expect to see this concept explored within the confines of some sort of OSR pages, perhaps a medieval authentic one, after everybody in the D&D-sphere starts adopting it.

Or, if you want to see what next month’s D&D topic is today, check out these blargs:

That last one has a full set of links on the right side-bar.  It’s a deep rabbit hole, but one well worth excavating.  Your games will never be the same.