Today, over on the channel, we offer up a bit of a rarity – a fourth generation warfare miniature wargame.  Sure, part of the motivation behind this particular installment of the Joy of Wargaming was tweaking the noses of Corporate Entertainment by lampooning coverage of violent unrest as “mostly peaceful”.  But there is more to it than that.  Before we get into the deep end of the pool, let’s look at the set-up.

First, we have the sleepy little town of Landport, Oregon. You can see the two forces arrayed for battle in the southern part of the photo. 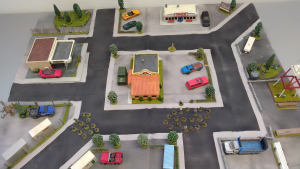 A closer look reveals the larger mass is a black-clad army of ‘activists’ funded through various foundations, NGOs, and cut-outs.  We call this group, AntiBaGs, which is a diminutive acronym for Anti-Bad Guys.  The idea that merely naming youself “The Good Guys” would convince anyone that your team is on the side of angels might sound silly at first blush.  You’d have to be an idiot to fall for that.

But most people are idiots.  That silly trick works on most people.  Disregard at your peril.

Opposed to the AntiBaGs is a small group of local cops who didn’t get the memo from the Soros-backed DA that the only legitimate arrests this night are arrests of those trying to stop the above-mentioned group from torching the Northside Diner.

Accordingly, the locals have stayed off the streets as these two forces clash.  One non-local who showed up to the party is ace cub reporter, Tricia Tanaka. 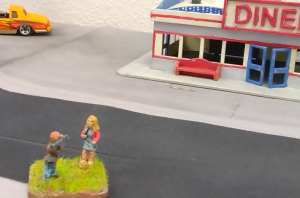 And here is where a simple game of ‘smash the Mom and Pop’ store takes on a decidedly different twist.  That camera terrifies both mostly peaceful protestor and selectively blind cop alike.  In game terms, wherever the camera aims, the figures dare not move.  No attacking.  No burning.  No Looting.  No shooting.  With every turn, a random section of the board gets ‘switched off’, and that creates the potential for some new and surprising wrinkles in the game.

It also opens up the door for commentary on how modern media coverage looks utterly random, and how the cameras are never pointed at the right place.  Even with the right place is as obvious as a six-story building fire or paid saboteurs flipping over cars.

My little channel, now at over 1600 subscribers, might not be the biggest threat to legacy media, but thanks to videos like this one has offered viewers one more alternative to the standard Hollywood/NYC line.  And with a shoe-string budget it has taken more than 20,000 hours of time and attention away from the well-financed juggernauts.  It might not be much, but it’s something.

Because my own little channel represents a strongpoint in the fourth generational war being waged for the soul of America.  I am but a humble spear-carrier in the arena of ideas, and over time a great many others have found and enjoyed my efforts.  Men who thought themselves alone have heard a voice shouting at them to rally ’round and laugh as they fight their way through these times of trouble.  And if we save even one soul from despair, it will all have been worth it.