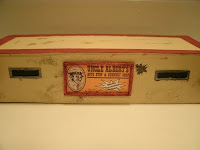 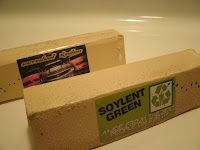 You’re probably going to have to click on those pictures to get a better look at the billboards.  I realized this past week that something was missing from my arena – something to give it the look of a true sports facility and not just a random parking lot.  Advertisements.  Lots and lots of advertisements.

Following in the grand Steve Jackson games tradition, I’ve decided to keep things local.  The Hawaii Autoduel Arena (Drive with Aloha – Drive Well Armed) is the largest AADA sanctioned facility in the state.  With only four portable jersey barriers, it’s not the most technically sophisticated arena around, but it is flexible.  And let’s face it – autoduel fans aren’t known for their high level of sophistication anyway.

Next Up:  My Fave