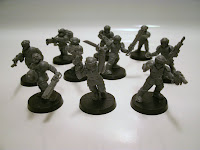 Time to start introducing this little hobby to the boy.  A few weeks ago, he got a box of Warhammer 40K figs to practice on, but I can’t let him have all the fun.  Tonight, we glued them together in whatever way seemed cool.  Here are our results, sans paint.

Warhammer players will recognize these as Imperial Guardsmen – Cadians, I think. They will also recognize that WYSIWYG-wise, they aren’t a 40K legal squad.  That’s okay, because they won’t be used for 40K.  Worst case scenario, we’ll run a few games of Necromunda with them. Best case scenario, they each have enough personality to work in a game of Frag. 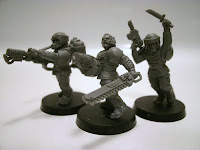 But they boy and I swung by the local game shop last Monday to scout out the tables, and what I saw disappointed me.  Out of 14 Warhammer 40K players, not a single one played with a fully painted army.  I’m not really a painting snob.  I don’t have a problem with people who aren’t the best painters in the world.  But I don’t play unpainted. 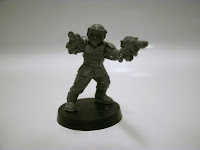 Okay, so maybe I am a snob.  But if I’m going to go to spend all this money, and go to all this trouble to build and paint an army that looks good, I don’t want to have to play against random silver hunks of metal.
So we’ll stick with our own little mini games for now.
One Comment
Making Adventure Fiction Great Again
Subscribe today to be first to hear about my new release, plus receive a copy of a free fantasy novella!
Follow