Just as promised yesterday, I’ve got the first of a series of work in progress posts for all you faithful reader out there.  Most of the work here was accomplished over the weekend: 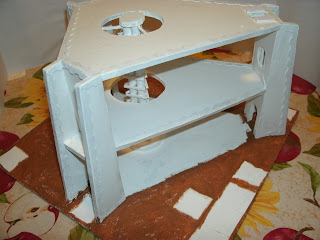 The brown portions of the ground here were primed, a little sand added, and then primed again to seal in the sand.  I used the same shade of brown as used on the other boards so that they’ll blend in (almost) seamlessly.

It ain’t pretty yet, but it’s progress.