You can find a lot of places covered in red dirt on this old blue marble on which we live, so red dirt alone is not enough to convey the idea of an alien world.  For that you need aliens, and not just alien animals.  Alien plants go a long way towards that end as well.  Here are my alien plants: 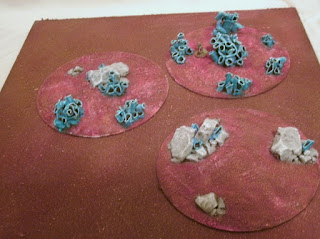 These were build using an old TerraGenesis trick: melted drinking straws painted up teal.  The craft store sold wide diameter straws that worked great as a thicker diameter more mature plant.  Those plants mean the rocks and such in the following photos won’t work on any other terrain setup, but they do a great job tieing all of this terrain together as a set.  And the bright teal sets them off from the surrounding dirt as well.  No question but that we’re not in Kansas here. 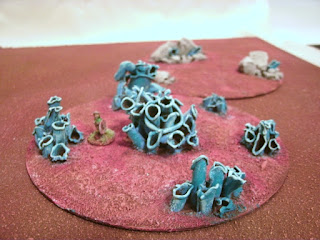 As with the colony, the rocks are just driveway gravel superglued to old video game CDs.  The white rocks really set them off from the dark red surroundings, and that contrast helps conveny the alien-ness of the place, too.  Speaking as a geologist, it would take some interesting geologic processes to end up with those big bone-white boulders scattered around a red plain of fine sand like that. 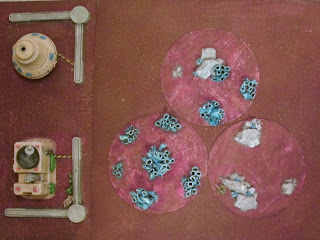