…Preferably mineral rich land on an uninhabited planet.  If you can’t have that, the ‘mineral rich’ is more important than the ‘unihabited’.  At least for rapacious human colonists.  To that end I picked up more 12-inch square boards to build a modular terrain setup for some tabletop sci-fi action.  At the 10mm scale, a two or three foot square setup should do it.  With one board left at home, another eight should od the trick. 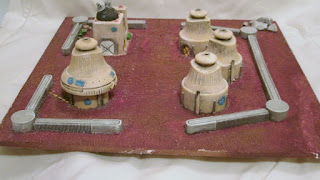 [Note to self: Craft board 3mm thick is so thin it warps no matter how long you press it.  Also, it doesn’t work with the colony you built on 5mm thick craft board.  Back to the hardware store for me.]

In the meantime, here is the home base for the 10mm colonists and marines, built entirely out of found items. 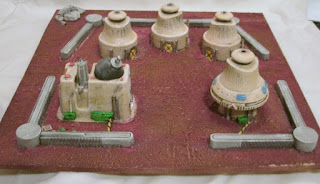 For your inspiration, here’s a list of what became what: