Skip to content
The mystery MechWarrior vehicles look a lot better with a fresh coat of paint.  They’ve been de-weaponized so that the Buy ‘N Large crew now have a little runabout (left) and a large cargo hauler (right).  The pink tires don’t look right against the white background, but the red dirt turns gray tires this color, so it’ll look okay on the game boards. 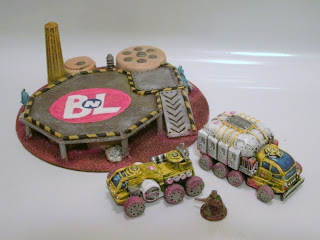 Technically, the windows should probably be a nice light pinkish.  The traditional bright blue windows are a result of the reflection of the blue sky.  On our !Mars planet they would reflect a pale salmon-white color.  I decided to go traditional, as the visual cue that these are windows is more important than true verisimilitude.

Besides, a red planet with a blue sky is strange and alien.  Also, I already painted the windows on the colony buildings blue before I thought of this.  This way everything on the table matches. 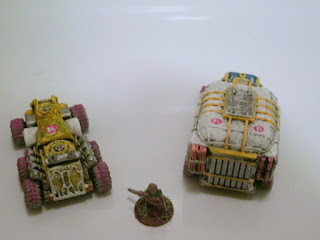 I’m particularly happy with how well the teeny BNL logos turned out on the backs of these things.  This proof of concept is going to lead to logos on the crew’s jumpers.  Probably not the front over the breast pocket, though.  Big ones on the back of the shirts.  I’m good, but I’m only human.