“Visual sightings of aliens or physical effects on animate and inanimate objects.”  Starting a blog post with a definition, how lame.  Hopefully the rest of the post makes up for it.

It’s no secret that Matakishi’s Tea House has been inspirational for this sci-fi project, and one of the things I’ve been promising is an alien artifact-cum-structure like the Face of Boo (as seen near the bottom of this page).  A child sized mask would take up the bulk of a 10mm scale table, so that idea wouldn’t work.  Instead, I combed six different stores before finding this little gem in the discount store for the princely sum of two dollars. 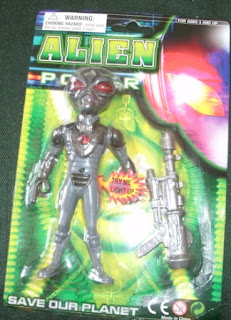 I didn’t even need a knife or saw for this one, just snapped off the head and limb.  Buried it in a mix of sand and standard white glue, and jammed a bunch of stones into the side of the hill.  That’s one alien statue, buried in the sands of time. 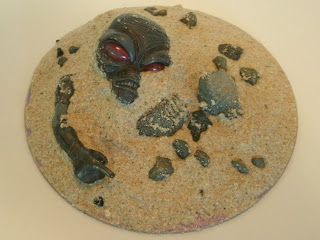 Thought about snapping off the feet and making an extra-terrestrial “Ozymandias”, but the feet of this figure are just booted feet – they could be anyone’s.  So this will have to do.

The arm helps make this idea my own – does his hand point to a buried tech cache? 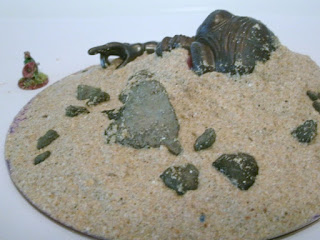