That bastard Nurgle just won’t leave me alone, and the Emperor doesn’t seem to be doing squat to protect me.  Three weekends in a row I’ve been laid low by some dumb cold or flu or Warp-Pox, too sick to paint and that’s really saying something. 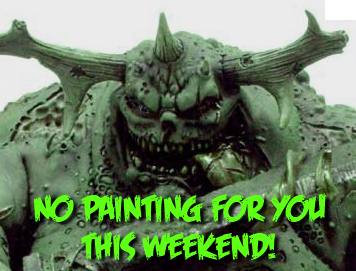 Still and all, even with a nasty string of failed Fort saves, I’ve been able to get some paint on the plastic.  Now if only I felt well enough to photograph and describe the darn things.  I’d do it right now, but I’ve got some moaning and whining and generally acting like a big fat baby to do.  Stay tuned for something just as green, but a lot more pleasant.