The latest addition to the human fleet for the game I’ve taken to thinking of as Big Thrust is fully built and painted.  This bad boy was hand made out of foamcore and lots and lots of found items.  Old medical syringes, superglue lids, a pen lid, bamboo skewers (again), disposable razor handles (again), and lots of cereal box cardboard.  The two-tiered level with the red band around it is two peanut butter jar lids glued on on top of the other. The most expensive part of this ship was probably the super-glue used to hold her together. 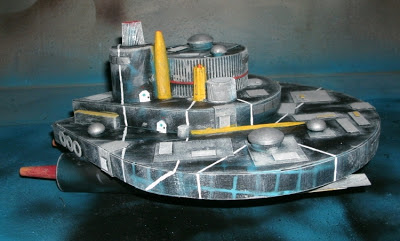 If you look close you can see two little white doors with blue dotted windows.  That should give you an idea of the scale of this battleship.  It’s not as majestic as some others, but rules-wise it’ll pack the same sort of wallop.