Skip to content
The best local game shops in town is one of those cramped little shops crammed full of all sorts of odds and ends the store owner has collected over the last two decades.  It’s all too easy to while away a full hour digging through boxes of random game titles published since the early 1990s.  This store has a shelf of Paranoia supplements, ICE’s MERP books, and more old wargame rules than Carter’s got liver pills.  One of those shelves holds a hundred or so small press wargame rules covering everything from ancients to sci-fi and every scale of battle from skirmish to massed battle. 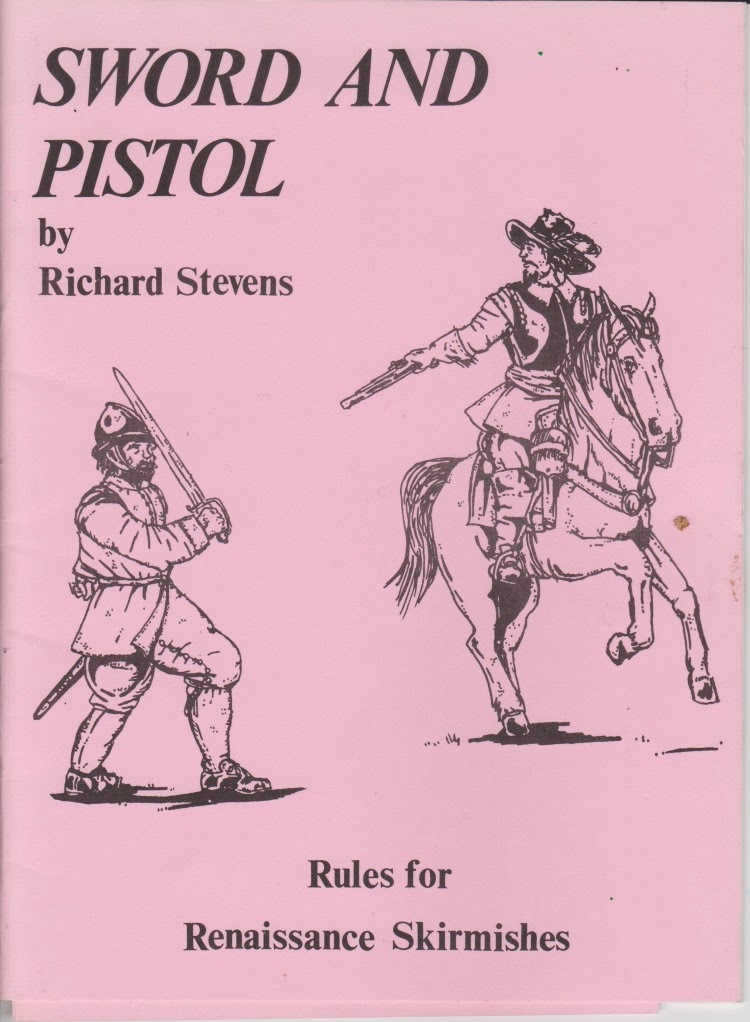 On a whim, I bought a late-Renaissnce skirmish set called Sword and Pistol by a bloke named Richard Stevens.  The copyright on this set of rules is January 1985, making it an interesting look back at the times.  For example, the introduction states that the set was designed for a fast moving game, that “usually lasts for two or three hours”.  There was a time where two or three hours was considered fast.  That amuses me.  These days the guys touting their rules as fast are clocking in at less than an hour a game.

So how does it play?  Well…can’t say as I’ll ever find out.  It’s just way too fiddly for my tastes.

Sword and Pistol uses written orders for movement/attack. It classes figures into eight different grades that can move at five different speeds – you can only move up or down two speed classes per turn, so you’ve got to track that.  There are rules for accidental collisions – even between people on foot.  Each of the eight figure classes has different to-hit chances with the fourteen different missile weapons, given to you in a chart.  There’s another chart that does the same thing for melee. Add in charts for morale, quirky costs for figures that turn while moving, and so on, and the whole thing just gets way too complicated for my tastes.  Even with just the 8-12 figures recommended you’re looking at spending a lot of time on book-keeping rather than playing.

Don’t get me wrong, the rules could be a lot of fun if you’re looking for a sort of poor-man’s-wargaming-version-of-Squad-Leader. This may be one of those games where having a GM set it up and walk you through the complexities could make for an enjoyable afternoon.  But it’s not for me.  I’ll stick with the modern skirmish sets like the Song of… series or the Two-Hour Wargame titles.