This new fantasy terrain is proving to be more difficult than expected.  My goal is to put something together along the lines of the The DMs Craft, but it ain’t as easy as it looks.  For one thing, he works in the big 28 scale, where my stuff is built in God’s Own 15mm scale.  So everything is that much more fiddly.  For another thing, I have a much higher bar for acceptable quality than he does.  That’s not to say that his stuff looks bad, just that my initial fumblings don’t reach his level, and thus won’t reach my table.

Here, take a look at my first attempts at a simple pair of openable doors.  Heavy cardstock just doesn’t have enough heft to support swinging doors, and frays much to easily. 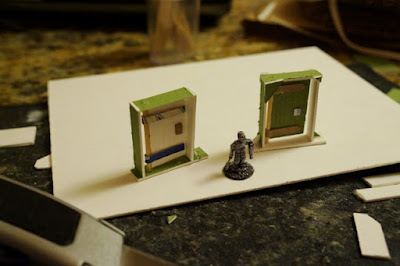 They are too big.  That might work given that my dungeons are mythic underworlds where the normal rules don’t apply, but the tattered ends of the strips, and the fact they tip over when opened?  That just won’t cut it on my table.  So these shoddy doors went right into the circular file.

Likewise, with the tiles themselves.  The picture (shown a few weeks back) gives an idea of how rough my attempt at cheap construction looks: 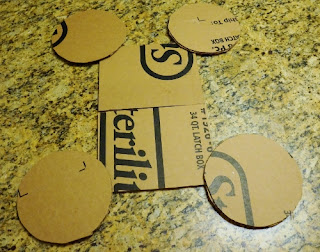 The towers aren’t round, the flat edges don’t line up, and you can’t see it, but the corrugation shows through the cardboard even before painting.  That’s only going to get worse.
Unacceptable.  Castle, meet the circular file.

That’s okay, a night spent learning what doesn’t work has some value.  This time out, for example, I learned not to craft tiny little features a few hours after grouting a tile wall.  My fingertips are calloused and throbbing, not ideal for fiddly work.  Rome wasn’t built in a day, and we’ve got all year to figure this thing out.