Skip to content
When last we met, I file-thirteened a pile of half-finished terrain consisting of a bunch of shoddy dungeon work.  This time out, I built a dungeon using my preferred materials, foamcore and balsa wood.  This time around, I used foamcore for the bases and balsa wood for the ‘walls’.  The balsa is straight and very easy to work with.  So easy, that I ran out of it quick and had to halt work for a few days while I ran out and picked up more of it.  The photos below show just a few of the three-inch square tiles constructed to date.  I also have a small number of six- and nine-inch rooms to add to the mix as well.
Now, I’m not sure that this is going to work out well.  Everyone tells me that foamcore warps like the devil when you paint it, but that’s never been an issue for me before, so we’re going to give it the old college try.﻿ If it doesn’t work…no problem, that just means I get start over, and that means I get to build more stuff.  It’s my own little Xanatos gambit. 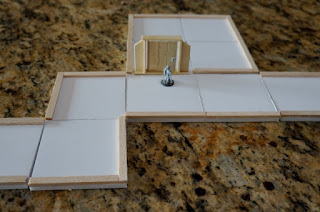 Like the tiles, my second round of doors turned out better, too.  This version was constructed entirely out of popsicle sticks, which give it a lot more rigidity.  The base is still too light, though, so every time you open the door, the whole thing tips over just a teeny bit (one of the virtues of working in 15mm scale) and the door winds up acting as a kickstand.  It’s not too egregious, though, so we’ll live with it. 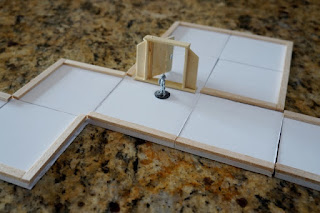 As you can see, they are still a little too big, but that adds to the alien-terrain feeling.  And hey, ogres, giants, and dragons gotta squeeze through those things, too, you know!
The next step, painting, will be make-or-break it.  I plan to base these things in dark gray spray paint, and even though I’ve got something designed for use with styrofoam, you never know until you pull the trigger.  If the painting goes well, we’ve got a new dungeon tile system.  Better yet, and I have some thoughts on how to make this system even more flexible in ways that I haven’t seen done before.  Stay tuned.
* * *
Last month was my best month ever for hits on this blog.  Thank you all for stopping by the old Abox residence.  You folks are the best motivation evar!
2 Comments
Making Adventure Fiction Great Again
Subscribe today to be first to hear about my new release, plus receive a copy of a free fantasy novella!
Follow