Skip to content
The kids were kind enough to playtest Castle Meatgrinder over the holiday break, and we found that it needs some serious work.  They had a good time, but I wasn’t satisfied with the amount of action, the speed of play, or the organization of my notes.  Most important, I was not at all satisfied with the amount of stuff in the dungeon.  We’ll talk more about how I can improve as a DM later.  For now, let’s look at what happened.
Seven PCs entered, and seven PCs returned.
Three entrances the players had, a barred door, an open cave, and a strange stone passage whose entry was carved to look like a mouth.  They chose the open cave, and after dropping down a flight of stairs found themselves in a 30-foot room with stairs leading down in all three cardinal directions.  The center of the room held four large columns surrounding a simple well.
After putzing about with the well for a bit, they chose to descend to the right.  A bit of exploration through large, empty halls, and they found a plain chest in an alcove.  Opening it dropped an iron cage down on the thief and cleric sent to investigate.  Together, they managed to lift up the cage enough to free them.  Just as they slipped free, cultists appeared in the distance.
They challenged the party, wary, but not hostile.  When they realized the party was interlopers they attacked!
﻿ 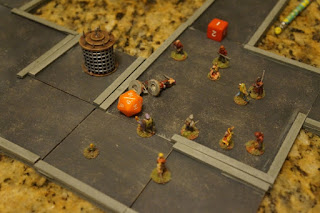 The party’s pyromaniac Halfling lit them up with burning oil, and they quickly dispatched the red robes with little trouble  They scored 25 gp and a strange gold mask the leader had been wearing. 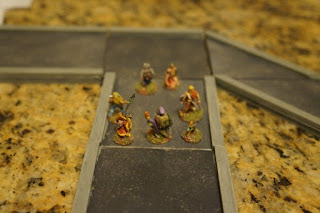 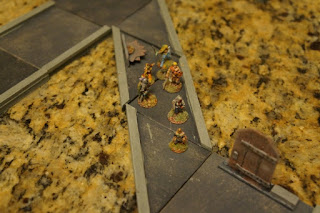 My wandering monster dice kept coming up sixes, and that meant the only other combat they faced was two tentacles guarding a treasure horde on a small island.  After beating sense into the tentacles and driving them off, they took the loot and ran.

After several hours, two combats, several traps, and even a bit of role-play, it was time to call it a night.  The team enjoyed the miniature heavy version, but at the conclusion suggested that they’d prefer to return to Skull Mountain and see if they can get past the shrieker at the entrance to put some hurt down on the orcs that guard the entryway.

I’m not much for railroading, so if that’s what they decide…I’m up for it.  Even if it does mean shelving the dungeon terrain for the most part.  I’ll just have to find a local game convention and run Castle Meatgrinder for some strangers if that’s what it takes.