Or…a funny thing happened on the way to the dungeon.

After nearly forty years of tabletop gaming, it can get a little hard to recapture the fresh weirdness of Gygaxian fantasy.  Particularly true in this day and age when the majority of D&D creatives believe that the height of creativity is something along the lines of, “just like before, only WOMEN!” or “just like half-orcs, but half-demons/half-dragons/half-drow/half-kitchen-sink”.  So it was with some relish that a friend pointed out What Happened at Wyvern Rock. 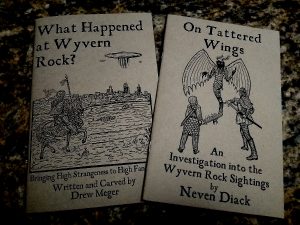 And Neven Diack provides a nice, dark addition to a D&D campaign that tickles my grognard bone with an emphasis on murkiness and uncertainty and unexplainable events.  His marriage of cross-dimensional (or cross-planar) aliens (or demons) involves a bit of book-keeping, but it is behind-the-screen book-keeping expressly designed to inject a spot of weirdness into the game.  Sure, your players might recognize the little gray men, but they don’t have forty years worth of stats and rules to fall back upon to understand how to deal with the little anal-probers.  And their characters…

They’ve been hob-nobbing with, and murder-hoboing, funny lookin’ fellers for years.  What’s one more short inhuman thing after dungeons full of the creepy little blighters?  It’s just one more form of magic that wants them dead and probably has some nice loot available on board that fiery wheel in the sky.  Or, gods help them, the characters may even try to talk to the strangely sedate kobolds in the silver suits.  Either way, it’s going to be weird and unusual, and even the normal rules of magic won’t apply.

Neven does a great job providing just enough starting material in a way that leaves the mystery unresolved for everyone.  The main book includes rules for weirdness – and in fine old school fashion includes a sort of mini-game to track just how weird things have gotten.  he also includes three escalating encounters with the weirdness as well – almost adventures in their own right.  But mostly, he provides a fresh new look at the game, and an inspirational way to Keep Mystara Weird that feels almost Lovecraftian with out the modern “tentacles and jokes, yo” crutches one normally sees in this sort of product.

I haven’t read On Tattered Wings yet, nor have I received my copy of the now completed KickStart for the second issue of this ‘zine.   And if physical reviews are important, I can tell you the thick paper and heavy stock covers are pretty robust for a ‘zine, and should hold up well at the table.  The art is simple line carvings, and impressively marries the look of hoax UFO photos with dark age wood carving.  Good fun and while the ten bucks for the short read might seem steep, it’s worth it for the quality and depth of Neven’s thoughts.