When old Andrea Sfiligoi tells you that a game is built for four to six models, he means it!

Tried running a gauntlet style run of five figs through a field controlled by ten figs, and it took a long time.  Each character in Rogue Stars, is characterized by around a half-dozen traits.  When you’ve got to manage one crew of 4-6 it ain’t so bad.  Work in a second crew and you can just barely keep the wheels on the road. 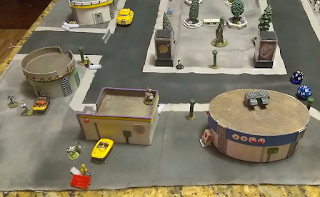 In this latest game, I tried to run a security team of 10 figures.  Their stat-lines were kept to a minimum and they weren’t terribly powerful, so it looks manageable.  Unfortunately, this game requires the tracking of three different states (pins, wounds, and one of several modifiers like shaken or resolved or disarmed).  Throw all that together and it turns into a bit of a slog. 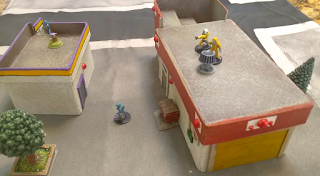 Particularly when its your first real game and you’ve got to keep returning to the rulebook. 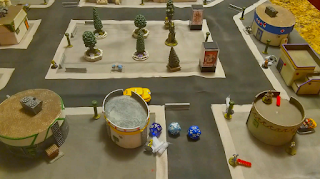 Lesson learned.  Gotta keep those squads tight if you’re going to run two of them at once.