Jeffro spitting fire on the latest episode of Geek Gab:

There’s a key moment where Jeffro points out that Modern D&D cannot handle a moment like that in The Two Towers where the Fellowship of the Ring breaks up.  Taking a broader view, I would contend that a truly Epic D&D campaign requires Chantisonian faction play.
For those of you out of the loop, Chanisonian faction play takes its name from a combination of Chanticleer, a notoriously hilarious Twitter firebrand, and Dave Arnseon, the man who married the Braunstein proto-RPG with Chainmail to create a style of D&D that seldom sees the table today. 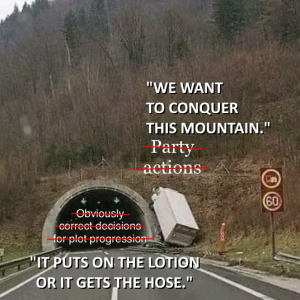 The premise is simple:  Each player earns or is given a character with a clear goal and the resources to achieve that goal.  The goals for each player can be mutually-supportive or mutually-contradictory, but generally speaking no player has enough to “win the game” outright.  This forces players to work with and against each other to achieve their character’s goals.  This is a style of play that embraces henchmen and hirelings, and encourages players to think not as a lone wolf, but as a member of a more heroic managerial class.

In practice it looks like this:  A city on the border of civlization, run by a corrupt Duke.  Player A is a climbed to the rank of Captain and earned a warchest before quitting the service of the corrupt Duke.  He wants to carve out a castle and small barony from the wilderness outside a border city.  Player B is a cunning thief who has backstabbed his way into leadership of the city’s thieves guild.  He wants to take over the whole city government.  Player C is a druid who wants to check the growth of the city and preserve a sacred grove out in the woods perilously close to Player A’s intended castle.  Player D is a cleric who has been appointed to the city to re-invigorate the flagging faith of the citizens.
Throw them into a blender and see what happens. Does the merc make a deal with the druid to protect the grove with promises of pushing back against the city?  Does the cleric enlist the mercenary’s aid, trading moral authority and combat buffs in exchange for muscle to push back against the thieves guild?  Do they all agree to work together to overthrow the Duke?
The easy example from literature is Game of Thrones, but I’m already bored so let’s look at a good fantasy epic instead. Most people think of Lord of the Rings is a pure good vs. evil tale, but if you look close you’ll see that it is a factional story.  Sure, Sauron and Saruman are loosely allied and we all know Sauron will betray Saruman at the first opportunity, but those are still two factions.  On the side of the good guys you’ve got dwarves, elves, Rohirrim, and Gondorians.  Heck, even the trees represent a separate faction.  Yeah, they all want to beat back the Dark Lord, but they don’t always agree on how or where.  There’s a lot of negotiation that goes on in those novels.
The Fellowship acts as a wild card.  They run a few delves, and manage to take a few pieces off the gameboard (the balrog) or move pieces onto it (the army of the dead) to counteract other potential factions.  The army of the dead arise from a delve, and in the books do little more than negate the power of the Corsairs of Umbar.  Even the super-ghosts of Peter Jackson fail to insta-win the campaign.
If that’s the kind of play you’re looking to get out of D&D, then you’ve got to turn away from static parties and pre-written scripts and embrace the chaos of faction play.  In a lot of ways, it’ll make your job as the DM a lot simpler. 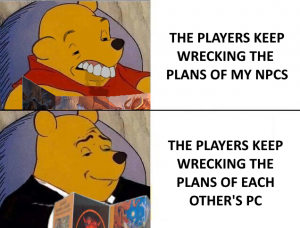