It took about seventy-five dollars and a month of painting, but I now have one full army ready to go for Dragon Rampant.  Naturally enough, as a human army ripped from the tapestries of 13th century Europe, this force could stand in good stead as a Lion Rampant army as well, but let’s be honest – 2022 is shaping up to be a fantasy year. 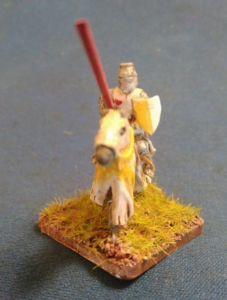 All fifty-four of these figures are from Khurasan Miniatures, specifically from his 13th century feudal line.  I love the look of the barrel helms, and the cross-inspired warclubs complete with inset gems.  This fellow had a serendipitous little bit of red escape while painting his lance.  I didn’t notice it until the figure was varnished and complete, but the heart shape and location were too perfect to fix.  Somebody was watching over me on that one.  It’s astonishing how often mistakes like that turn into blessings when a part of your goal is to pay tribute to God, even in small hobbies like miniature wargaming.

The game has yet to see the table, but I can tell you that I picked it up because I really like the way i promises to give a big battle feel with just a few handfuls of 15mm figures on the table.  My collection has been sadly lacking in mounted knights, and this project gives me a great chance to split the difference by fielding two full units with just a dozen figures.  It’s tight and efficient design, and for a gamer of limited means such as myself, that counts for a lot. 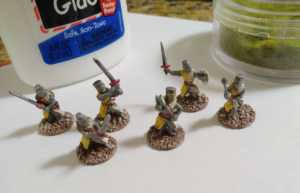 These foot troops will be classed as either Elite or Belligerent, depending on the army list I’m experimenting with at the time.  Or perhaps that will depend on the results of shoving armies around a little paper map.  With just six units on hand, I’ll have to make do with what I’ve got.  That means the spearmen might be poor peasants at times, or heavy infantry, as the needs of the service require.

Stay tuned.  I’ll let you know how the games turn out.