A message to those of you who play old school versions of D&D:  When the freemium version of D&D hits, don’t expect a flood of 5e refugees to hit your favorite edition and start stinking up the place.  Let’s look at a few reasons why. 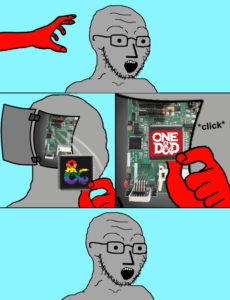 Most modern D&D players are NPCs.  They are conditioned to seamlessly transition from one app to the next without the slightest hestiation or regret.  If the man in the video says to jump, they don’t even ask how high before leaping.  They will move from the current Current Thing to the next Current Thing and leave your favorite version of the Thing alone.

3.  Most of what remains of the 5e crowd consists of players who cut their teeth on the Fourth Iteration of the Thing.  When the Thing changes all out of recognition of the Thing they loved in their youth, they won’t go back any further than their own youth.  We should expect a flourishing trade in 4e discussions, and a renaissance in analysis from fans both more passionate and more knowledgeable about that lost edition than even the men who wrote it.  They will make a strong argument for 4e as a fun and worthwhile game in its own right – alongside the more honest admitting that whatever its genius it ain’t D&D.

There may be a few slumbering greats ready to be plucked from the wreckage of 5e.  I’ve seen a few just in the last six months.  But they will be few and far between, and they will be joined by an even number of malcontents looking stir up trouble.  Keep your arms open, but guard your heart, and stick to your old school guns.  We grognards have much to offer the refuge-5e’s, but we must exercise caution when taking on new converts.  Not everyone can play at this level, you know.