Today feels like a good day to spam your attention with several hosts of 15mm painted figures.  We’ll start with the historical crowd, all of which come by way of Irregular Miniatures.  A unit of twelve light infantry for the British, with an even dozen tribesmen to match.  With these on hand we may be able to swing a game of Rebels and Patriots.

Just in case we decide a little skirmish action is in order, I went ahead and painted up a couple of mountain men too.  They’ll work great in any French and Indian War scenario.

On the fantasy front we added a 12-man unit of peasants to the Lion/Dragon Rampant medieval human army.  Yeah, having livery this bright and matching is probably a historical no-no, but it will help tie them as a unit to the overall look and feel of my Broman Imperial troops.

By way of illustration, here’s what they look like when matched up with the rest of the army.  The two guys on the far right are from Ral Partha Europe, the Demonworld figures sold in a warband pack, but the others are all from Khurasahn and as you might expect, they are a solid match.

And we’ll round things out with a full army for the forthcoming Xenos Rampant.  These guys are also from Khurasan Miniatures, and you are looking at a total of five packs, a ten pack of beam rifles, two command packs with a leader and two heavy weapons, and one pack with the overall commander in front. 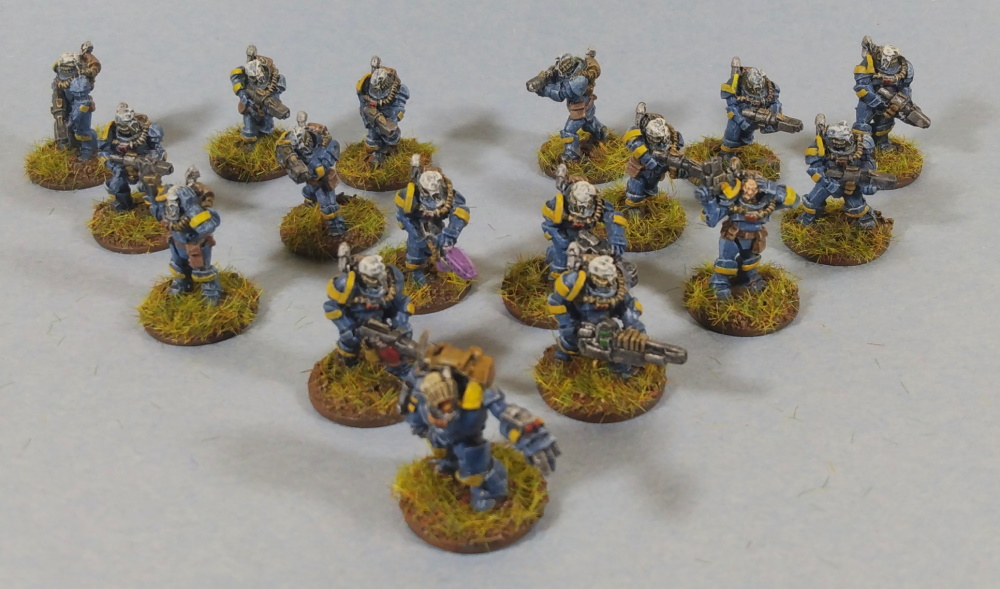 All told you get seventeen figures for about as many dollars, and as elite infantry in heavy power armor, you’ve got yourself a full army for killing xenos.  These guys have a nice steam-tech look and since they go well with either the 4DK or Vault style sci-fi, I sent with the classic maize and blue armor.