Rarely does one encounter such clarity and depth in the blogosphere that revolves around D&D:

When something takes off and becomes successful, you will invariably get a lot of interest, and a lot of people who will want to get involved. Success is infectious. The people who got involved invite other people who are also interested, and they in turn also invite yet more people who are vaguely into the thing, maybe, but they are a lot more into being part of a big crowd. However, the defining boundaries of what made that specific thing so interesting in the first place also become blurry.

You also get cognitive blind spots where your definition shall lead you astray. For example, parts of the old-school crowd are so wedded to B/X purism and its procedure-based gameplay (“the gameplay loop”) that that they end up ignoring AD&D, and with it the actual defining tradition of the classical era; as well as neglecting OD&D, the wild primordial soup of runaway creativity that gave us the strange thought experiments that are now worth examining and reconstructing. 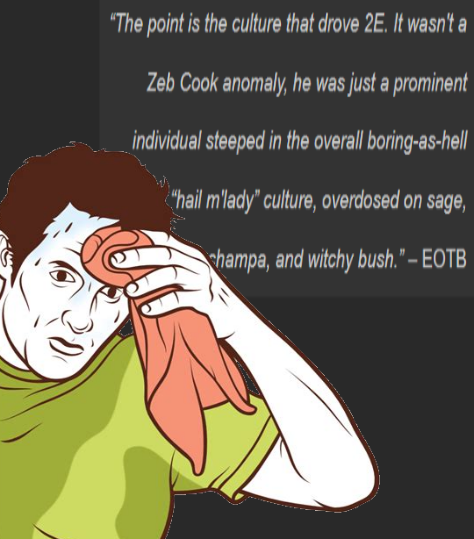 It’s a bit of a long read, but to any true enthusiast of the TTRPG medium, it is worth a read.  It takes a deep dive into exactly what separates the manly AD&D from the boyish 2e ruleset, with a keen focus on the shift from a darker and grittier fantasy of the late 70s to the shinier and more super-hero styled fantasy of the 1980s.

That’s an interesting observation and one that is hard to argue against.  Most analyses of the AD&D/2e split focus on mechanics and editorial style, but most make the mistake of treating the two games as a seamless garment.  Sure, it doesn’t take a particularly bright DM to convert from one to the other, any more than it does to convert OSR products between ACKS and LL, but there’s a lot more to a game than that.

Melan touches on this, but hits the ball out of the park with this spciest of takes:

[T]he playing culture surrounding 2nd edition is not simply a diluted version of 1st edition’s, but a hotbed of bad practice which will harm your games.

We had a lot of fun with 2e back in the day, back when we didn’t know any better.  Looking at the rules and the games we ran through eyes forty years older leaves no regrets, but I simply cannot imagine going back to relive those days of naive fun.  Not when AD&D continues to sit there, growing deeper with every re-read.