Related to yesterday’s post regarding people who have been playing AD&D wrong for decades – a club of which I was a solid member of for decades myself – Jeffro offers up a little look at what we’ve all been doing wrong for lo these many years:

Why this rule is there exactly is not immediately obvious. If you experimented with it at all, you would understand that this simple and strange sounding idea is one of the best ideas in gaming history BAR NONE. If you were also familiar with just what precisely Dave Arneson did with Blackmoor, you would realize that this rule was the key that allowed him to manage as massive and complex of a campaign as he in fact did.

But this story does not end there.

Read the whole post for a better idea of what happens when you implement one weird and obscure little rule. 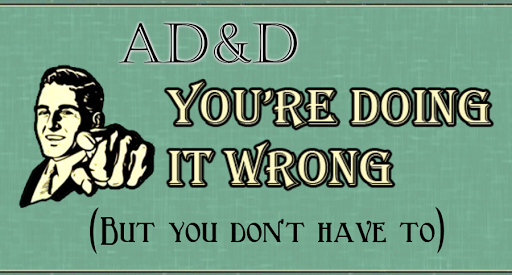 Be warned: Jeffro isn’t taking any prisoners when it comes to advocating this new-old style of D&D campaign.  Before you raise your hackles, consider the adage, “When experience speaks let theory be silent.”  There are ramifications to the rule he advocates for that are not immediately obvious, and it solves a great many problems that were dealt with by an ever-increasing list of houserules.  Or, perhaps “solves” is the wrong word – it prevents those problems from arising in the first place.

Give it a shot in your own campaign, you won’t regret it.