The Broman Empire, fresh off a victory in the Pink Phantom Hills, turns its attention to the east, where its diversionary force encounters the lead elements of the Orkish Khan somewhere in the depths of the Whitehart Woods.

You can follow along here, and if you would like to analyze the map for yourself, here is the current disposition of the forces.  The Great Khan and Emperor Meltzer are hanging back, holding themselves and their personal armies in reserve.  The Orks have the greater numbers, but the Emperor has the inside track.  Centuries of investment in a reliable road network will allow him to rush forces off to either flank far quicker than the free-ranging orkish hordes can hope to match. 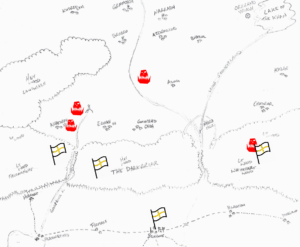 But that’s a consideration for another day, as first we have to find out what happens and Baron Elizabeth’s Farm!  Those results go up next week.