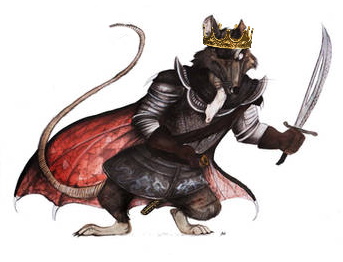 Herewith: the secret history of The Rat King.

When the guys in the BROSR started kicking around ideas for factions they might play in the BROvenloft extravaganza, I decided to finally throw my crown in the ring.  Instead of a military power like that of Kangsta Wrapper the mummy or Count Strahd von Count or the Spanish Inquisition led by Pius the XIII, I wanted to provide a more useful service, and present some mysteries for the players to uncover.  To kill two birds with one stone, I adopted the idea of the King of all Rats, who would send out intelligent rats to spy on the other players and play information broker.  Perhaps Kingmaker or perhaps just general stirrer of the pot, the idea here was to help spread information around the camapaign as much as possible. 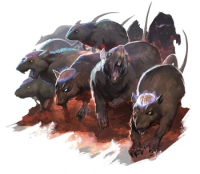 One of the more difficult things to adjust to in patron style of play is the fog of war, and these games can break down if the players are not given enough information to make solid plans or even set reasonable goals for themselves.  Creating a spymaster presents plenty of opportunity for clever players to make low risk efforts to gain an edge, and it presents yet another threat to players.  Now they have to worry about their internal security.

Since this is not designed to be a military power, I went with some fairly simple rules.  We would be using the spy rules in the DMG with a few little tweaks to account for the use of rats instead of people.  Here are my resources:

The fun part is that my patron has an AC of 10 and only a handful of hit points.  His armor is secrecy.  I nominated the basement of the Twin Peaks Cafe as his lair, in a hole in the wall hidden behind a stack of old Night Court video tapes.  If found, he would be helpless.  Having no treasure, he could only bargain for his life with secrets.

Here are the three wererats at the top of the org chart:

The action started off fairly slow, with a few minor queries for information, most of which was either 1. readily available from the Twitter feeds of the various participants, or 2. general background that could be inferred from the rulebooks. The players proved to be a mix of either generous or stingy with information, although the latter arose mainly from real-life distractions. To my knowledge, every time that I informed a player that they had been successfully spied upon, they responded with accurate information. My general sense is that the players were happy to reveal basic information like treasure, troop rosters, and alliances, but remained tight-lipped about their plans and plots. That’s to be expected, and since most of my missions were one-week affairs (classed as simple per the DMG) all that we had time to procure.

At the outset, my plan was to treat the Rat King as exclusively an information broker.  My first attempt at spying went poorly, with a failed check, and then a result of 01 on the discovery roll.  Right out of the gate, the Pope knew my dirty little secret – that my spies were cranium rats and not just the three named wererats.  To buy his silence, I ran a few ops for him.  This happened a few times in the early- to mid-September stage, where most players were still in the planning and building stage. In late September business began to pick up.  A failed hit on Bro-Pan the Sorcerer by a Vatican flag waving figure.  The formation of alliances.  The threat of Stormbringer landing on the shores of Brovenloft.  The early arrival of PCs.  All of these things proved to be solid kicks at the ants nest. 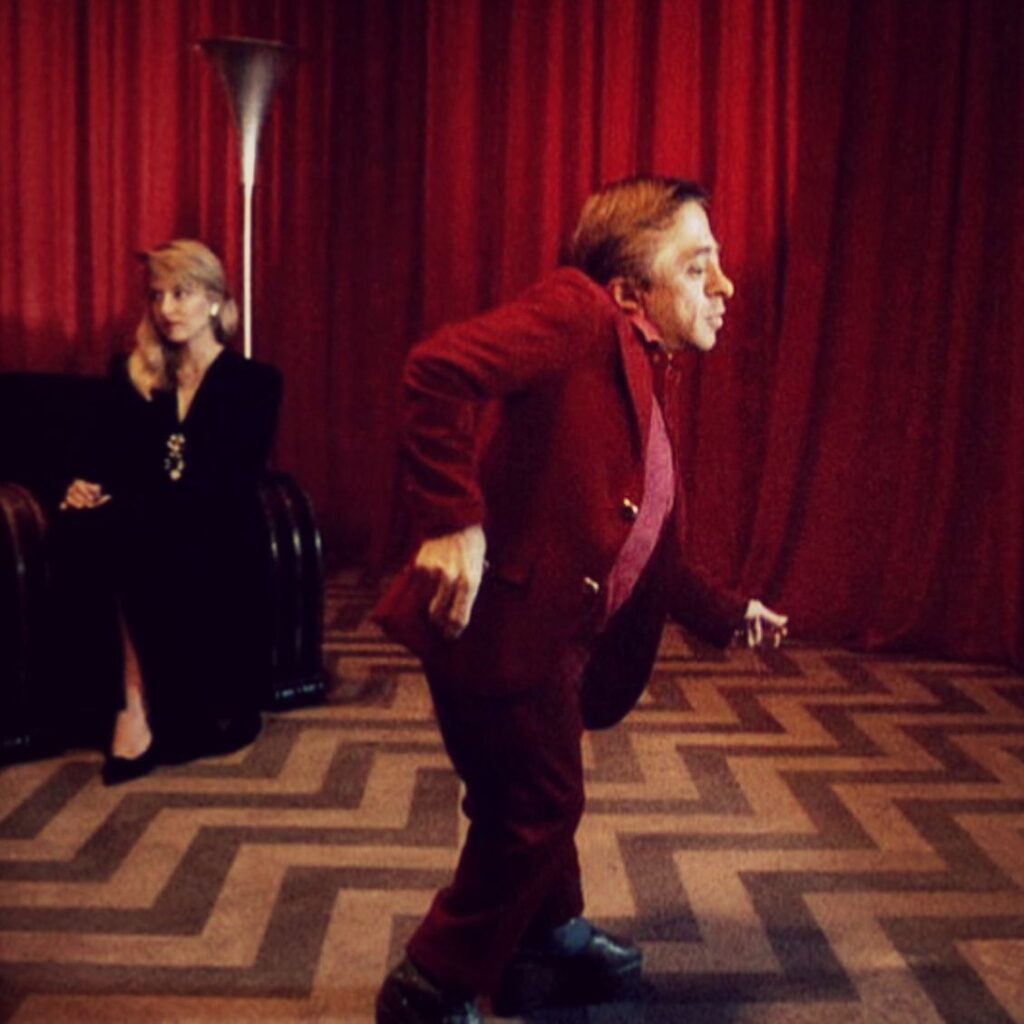 To complicate my own situation, the first player spent resources to find the Rat King proved to be his unknowing host – the animating spirit behind the town of Twin Peaks, a spirit I have come to think of as Lynch. He narrowed the location of the Rat King’s lair to somewhere inside the downtown of Twin Peaks itself, though he still hadn’t quite nailed it down to the basement of the Double-R Cafe.  With the threat of being discovered, the Rat King bought Lynch’s discretion and protection by agreeing to a hit on Pius XIII.  Serendipitously, the Pope had extended an open invitation to his court, which Rizzaldi accepted on October 1.  Given two weeks of prep time, the Pope’s days were numbered.

Around that same time, Annette made a report to Kangsta Wrapper detailing the Count’s forces.  Unknown to her, the Count had weres of his own in service, who were not fooled by the Rat King’s tricks.  He fed her false reports of his forces, which she dutifully returned to her client(s).  Eddie the Lich and Kangsta the Mummy approached the Rat King independently asking for this information, which meant a score of double cheese or so the Rat King thought.  Rather than pay the agreed upon fee, Kangsta paid 2,000 useless gold pieces to Annette, which she took without a word. 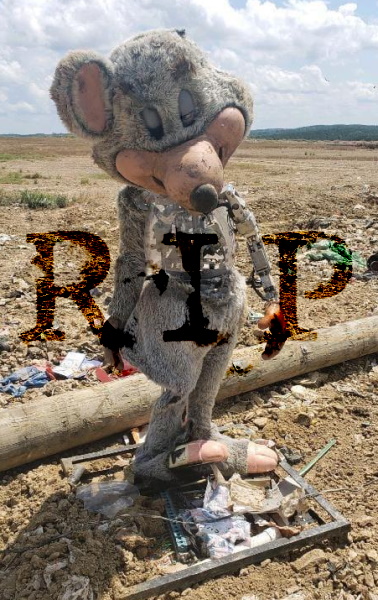 Reneging on a deal with a band of assassins, even one as low-key as the Rat King, is never a good idea.  With that insult, the Mummy bought himself a one-way ticket to Backstab Station.  A plan that wouldn’t work out so well for poor old Charles E. Fromage.  It turns out Kangsta was not a regular old 1e mummy as I had supposed.  he was, in fact, a 2e greater mummy and an ancient one at that, which put him into the 20CL range of power.  Lacking a +4 magic weapon, Charles had no hope of success, and was too far embedded into Kangsta’s lair to pull him out.  Interestingly, the Elf King, Erlbronig, would later claim to have put out this hit.  Negotiations broke down because the Rat King dared not squander his limited resources, and no deal was ever struck.  But the Rat King wasn’t about to turn down the covering fire.  He let the statement stand in part because he was busy with more pressing matters.

About this time, Mad Baron von Mordenstein requested information on horseless carriages seen buzzing back and forth between Twin Peaks and the Vatican.  Twin Peaks, under new management, wanted a way into the Vatican, and asked Annette to run over there and make contact with a traitor in the Pope’s court.  These two players had independently put the pieces in place for a great opportunity.  Annette arranged to have the Baron’s minions intercept her on the way to the Vatican.  They would rough her up, and take her vehicle back to the Baron’s castle, making the event look like a typical day in NYC.  This proceeded without a hitch….okay, there was one hitch.

While Annette was driving to meet the Baron’s minions, Rizzaldi found himself confronted by the business ends of five blades held by the Inquisition.  Somehow, that somehow being copious trips to the divination well, Pope Pius XIII had discovered Rizzaldi’s plan to assassinate him.  Arrested, treated well, but confronted by the sharpest minds in the Eternal City – and trapped by high mountain walls that had sprung up to seal the Vatican away from the rest of Brovenloft, Rizzaldi – and by extension the Rat King – was presented with a fait accompli.  Join the service of Pope or else!

Rizzaldi, sensing the changing winds, under the pressure of detect lies, and eager to save his own pelt, filled the Pope’s men on the details.  If they could get into Twin Peaks, spirit the Rat King out of the Double R Diner (and replace his cheese larder), they would work for the Pope.  This was accomplished with literally miraculous speed that very night, and the Pope’s terms were generous.  Keep doing what you are doing, but keep his men appraised of all job requests by other patrons, and keep them informed of whatever information you give out to the other patrons.  The Rat King found himself in a gilded cage, now a member of the Papal Intelligence Network.

Which left Annette out on her own for a few days.  When she finally made her way back to Twin Peaks…

We’re going on 1,500 words here.  Let’s take a break and tomorrow we can pick up the action here.