When last we met, the Rat King had been taken under the angelic wings of angelic beings and whisked away to the gilded cage that is the sewers beneath Rome.  But let’s take a look at Annette’s little adventure in the meantime.  The Mad Doctor Baron von Mordenstein had hired her to get a sample of the liquid diet consumed by the horseless carriages known to prowl the streets of Twin Peaks.  She just happened to be asked by the Twin Peaks guy – it was never really clear to me who was in charge there which is probably on-brand for Twin Peaks – to arrange for access to the Vatican.  He and one of the Outsiders were hoping to use a fashion show as a smokescreen to sneak in and engage in hijinks.  Annette, sensing an opportunity, asked for a vehicle to make the trip there and back in a day, but took four days to make the trip.  After dropping the 2004 RAV4 off with a couple of Baron von Mordenstein’s goons, she scattered a few elf arrowheads arounmd the clearing where they met, had the goons rough her up a bit, then walked the three hexes back to Twin Peaks to spin a story that looked something like this:

Now, what was the point of all this?  On the one hand, she had a job to do, and had no way of knowing that the day after she left Twin Peaks, her master would be ratnapped by Pope Pius XIII.  On the other hand, this provided an in-game chance to provide a clue to the Twin Peaks Patron that something funny was afoot.

There is an odd magic that happens in games as heavily laden in information warfare as Brovenloft.  The wide-ranging scope of creation that this style of play engenders provides a great deal of opportunity to craft little mysteries, and you as a participant have a great deal of leeway to reveal as much information as you want.  The temptation might be to play your cards too close to your chest – to protect your special little plan.

This would be a huge mistake.

Every DM who ever tried to run a murder mystery knows that you cannot provide too many clues.  Solving mysteries is REALLY hard, especially within the medium of RPGs, where the detective must rely heavily on the DM’s judgement about what details are important.  You have to flood players with clues, to help lead them to the answer, or at least touch on the clues and wiggle them as bait to see if the players will bite.  The same rules apply in a Braunstein.  You have a duty to offer to provide them with enough information to unravel your secrets.  You have to wiggle the bait, and if they don’t take it – if they don’t follow up – that’s on them.  But if you don’t give any information to them, you suck.  You’re basically cheating at that point.  The lack of information is lying by omission.  It’s a terrible way to play the game, and a good way to end friendships.

Figuring out how to provide enough bait, but to stop short of just blabbing the plan, can be a very difficult judgement call.  It is one that I struggled with throughout the Brovenloft experience, and I can only hope that the other players are kicking themselves today for not seeing the signs that I presented them. We’re looking for twist endings here, and not in the Steven Soderberg “look at all this information that I didn’t show you that completely changes the movie aren’t I clever”” manner.

At this point, we’re only up to World War Wish, which proved to be the preliminary artillery bombardment for the Big Hooptie – the battle of the vampire tanks which took place at the gates of Castle Sesylvania.  The Rat king sat that fight out on the sidelines.

Meanwhile, some random group of PCs, I believe from the Red Frontier, nuked the city of Dublin, removing Rizzaldi from the game.  Now that good old-fashioned legwork had been superseded by a reliance on scrying, there wasn’t a whole lot of work for a spy ring.  Rizzaldi sat in the Sweet Tooth Tavern for several days, days in which it would have been unsporting to move him on. Yes, the player knew Dublin was soon to be Ground Zero, but no one in Dublin did, including poor old Rizzaldi. 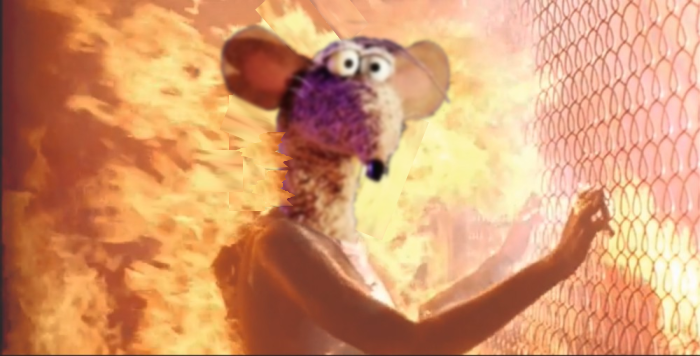 Annette Murdercello, playing the game honestly, would have arrived in Dublin to meet Rizzaldi that night.  Still a dozen miles away when the nuke fell, she found herself cut off completely, the last of her kind.  She still had access to fifty or so brain rats, but what she would do with those was anybody’s guess…and it was still only the half-way mark of October.

For my part, this meant the end of the Rat King as a going concern.  Effectively imprisoned and made obsolete, the last half of October meant biding my time to see if any opportunities to throw monkey wrenches into the works of the powerful forces at work would present themselves.

Annette planned on catching the first available train to Trollopulous, there to begin a new life as an experienced and powerful wererat/assassin with several dozen cranium rats at her disposal.  Not much of a legacy for a chaotic evil faction, but anything to make the life of Macho Mandalf a little more adventurous was better than nothing.

And the Rat King still had over 250-pounds of cheese in his dungeon.  Enough to last a lifetime.