Splintered Light is such a good miniature wargame company.  Clean scuplts with just the right amount of detail, tons of character, and so many options.  Today I’m bragging about my Dark Elf army for Dragon Rampant.

Some time ago, I ordered the guys on the left.  Only painted six of the wardancers, and used the other six for parts on other figures.  With the purchase of a formidable force of Dark Elves, they are being pressed into service as Scouts.  More importantly, I needed to try and match the color schemes of the new guys with the old guys.

It was just successful enough for my tastes.  These heavy spearmen shine bright in golden armor, and even though the orange and red are more muted, it just looks like the natural variation of uniforms.

Now this is the brilliant gold armor I was expecting. With just a splash of red fabric, they still tie in nicely with the spear armed unit of heavy infantry.

My Dark Elf force is a general purpose mix of troops.  The completed army contains a total of eight units of varying use for a total of way more than the standard 24AP army, even without purchasing upgrades to help give them an elvish feel.  That is by design, as it allows me to tinker, which should help keep the ruleset fresh over time.

I’m a sucker for a big stompy treeman, and for some unusual atmospheric lighting like this: 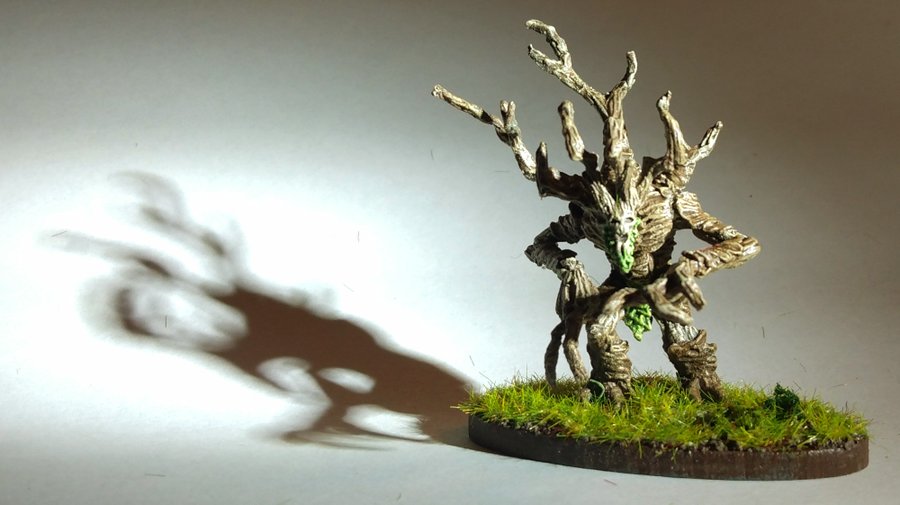 And one last shot of the light missiles, hand crossbow armed skirmishers.

Oddly enough, I saved the best for last. The command and leader types, which will come in handy for skirmish games as well.  Some lovely characters in here.