Who do you root for in this one?

Two very important take home lessons followed my first game of OPR: Skirmish. For one, an all-mounted goblin force makes for an army list that’s all hammer, no anvil.  For another, in a game like OPR: Skirmish you have to be careful how you use all that speed.

We should talk victory conditions first.  The standard game uses objective markers – whoever has figures standing on the most at the end of four turns wins the game.  This adds a little more thought and deliberation to the usual line-up-and-run-at-each-other game, but not much.  You pick a few markers to go at, and hope you can get your activations line up right

Here, you see they are all yellow – indicating no one controls any of them yet.  To remind myself of who needs what, I’ll swap yellow out for green if the goblins control it and purple if the elves do. 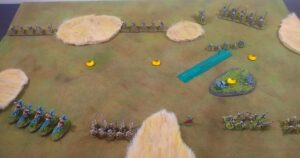 What the markers mean for OPR: Skirmish depends on what army you bring to the battle.  Some are better at holding ground, like big blocks of pikes, than they are at seizing ground.  The first turn becomes a game of trying to get the former into position around an objective.  Ideally, you’ll outwait your opponent, who will be forced to squat on a victory point with a unit that prefers to charge – like cavalry.

And that’s where their speed comes into play.  Since cavalry can move significantly greater distances than foot troops, they can wait and decide when to charge in and take advantage of their speed.  Unless the marker is placed in rough terrain or behind a big block of pointy-stick wielding enemies, both of which negate their super-power.

It’s an interesting conundrum, and it makes up the heart of the game.  It’s combined arms in the fantasy arms race, and it can be challenging at time.  Particularly when you field an all cavalry army.  Sure, you can better choose your fights, but with only four turns to work with, that doesn’t buy you nearly as much flexibility as you want.

For the goblins, we’re going to have to rein in some ground-holders. Fortunately, we have a giant for that! 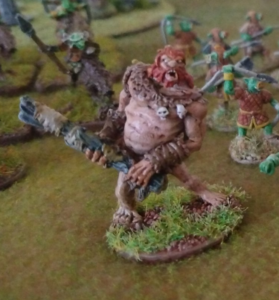