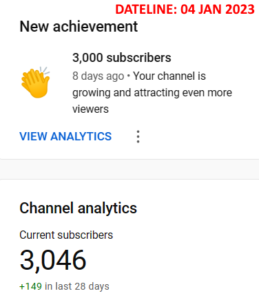 To my pleasant surprise, a late December push saw The Joy of Wargaming cross the 3,000-subscriber mark before the clock ran out on 2022.

Consider that we have now passed 45,600 hours of view-time.  That represents more than 22,000 movie tickets that we denied the forces of Teh Suck who run Hollywood.  That’s more than 45,000 episodes of drama TV.  It’s a drop in the ocean compared to the totals, but it is a drop that just keeps getting bigger with each passing year.

So far, the algorithms have not noticed the sly asides that let viewers know I am out of that merry band of rebels that goes by the vague descriptor “Our Guy”.  When they do, expect growth to drop off if the channel isn’t shut down completely.  (We have backup plans in place for that eventuality.)  The viewers have noticed those sly asides though, as some few comments have returned with a bit of samizdat of their own.  And more than a few critics have also noticed them, called them out, and then seen their waving red flags disappear quietly from the comment section.

We aren’t new to this game.

The YooToobs is a very different venue from the Twatters, and Management keeps a much tighter rein on discussions there.  This serves the dual purpose of avoiding any tripping of alarms and to signal to everyone that the channel serves Our Lord first and the hobby second.  They aren’t used to suffering from the sort of silencing Our Side has neatly danced through since 2016 and before, and so far there hasn’t been much pushback against it.  We just quietly go about our business reminding the hobby that alternatives to Teh Suck exist, and that alternatives to Teh Suck are more fun.

Before we close out, let’s take a closer look at the winner of this poll – which logged the highest number of voters in any of my polls – but for now look at that last option. 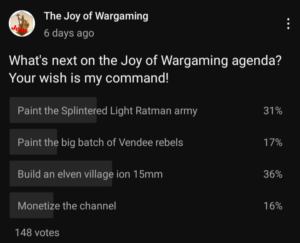 That was meant to be a bit of a joke, with perhaps a bit of market research behind it.  There are at least a couple of dozen guys who voted “Shut up and take my money!”  We’re still not big enough to risk turning this passion project into an obligation.  Money changes things, and I don’t want to stop dancing with the one that brung me.  I’m thinking that once we hit 5,000 subscribers the feeling will change from an extended hobby family to a more mercenary producer-customer, and we’ll see enough fiat dollars coming in to justify the added hassle.  For now, it’s still a labor of love.

Check back next year to see if we can maintain this steady growth, and maybe even clear that target that would open up the financial tap.